~ it's been just about five weeks for your hospitalization and I'm tired.

Tired of having no shakes to blend or eggs to fry or cookies to bake;

Tired of having no crap to side-step while bringing laundry into your room;

Tired of not chiding Go to bed at midnight (nevermind that I'm still up);

Tired of not sneaking into the den together to watch Law and Order while the younger kids rest;

Tired of not needing to stay up late to make sure you're home in one piece.


Please get well soon so I can get back to work.


P.S. ~ the younger kids want to remind you of their canoe trips and 4-wheeler rides, too. Please and thankyouverymuch.

Five Things Homeschooling Has Not Been 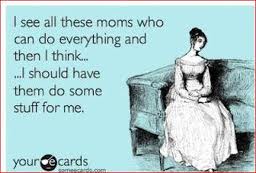 I had ideas fourteen years ago. Even five years ago. Now I know better. Many of my romantic homeschooling ideas have been complete bombs, but rather than beat myself up, I congratulate myself on the nifty slacker replacements that have filled our home. Some plans that did not pan out:

#1. Field trips once a week. Too many kids; too much trouble. What do I do with the baby and the toddler while the big and middle kids are trying to watch a show or listen to other adults explain how the post office runs (Ha) or where the light emanates from in a painting? I've been reduced to offering cookies as a bribery thank you to friends for taking a kid or two of mine to various places. And I learned to love coffee table books with great photographs.


#2. Kids begging to learn on rabbit trails. Whenever I've said something like, "Oh, you're into that book about Lewis and Clark? Let me get more and you can do some projects/write some paragraphs..." they turned into an elementary version of the obstinate, spaghetti-legged toddler. So it's math, grammar, and reading, then they bolt for the door or the lego bucket. Or the den, to watch Baby Einstein with the baby, because most of them hold the position that any television is better than no television.

#3. Me learning advanced mathematics. I thought that if I began again with a five year old and homeschooled all the way through high school that I would effortlessly move right along with the kid into a grownup understanding of the logic and beauty of math. Hit a wall halfway through geometry. Twice. Brain freeze conceeded.
#4. Science experiments with reports of hypotheses, observations, calculations, and conclusions. They never work like the books say they will and we all get grumpy. Also, my high schoolers (so far, two) are too busy to do them and prefer to read what someone else did. Our experiments happen by accident. Sort of. There was a terrible smell in my eleven year old daughter's closet that I yelled at her about because I thought it was from hidden dirty underthings. Turned out to be a baggie of flour and water she'd set aside to see how long it would take to mold that had gone rancid. It never molded but the smell? Interesting, huh?
﻿


#5. Love of classical music. I try. I put in a CD of our composer of the month every morning, which is great. But as soon as I try to tune in to the classical radio station in the van, there are many whines for dancing music ( I don't fight the country too hard, though).


For a more uplifting entry of great things I've discovered, here's last year's end of the year post, when my firstborn graduated.

We Howells have spring fever bad ~
Love,
Allison
Posted by Allison at 2:46 AM 1 comment:

Clearly, we have a Book Problem

I am just about 44 years old and I like real books. I cannot get happy about e-readers, even though the technology piques my interest. Today I was shoving a pciture book into a space too small and actually had to stand up and kick it in. Too many books, I muttered. Because I enjoy blogging and Facebook (See, I'm not too much of an old fogey.), I decided to go around the house, snapping pictures of Where We Keep Books. You'll notice the general mess, which I left because I didn't want to pick up it's real life.


I would happily get rid of all our DVDs and VHS tapes for some sort of box with movies confined to computer blips (I guess we'd need a new television as well...) but books as computer blips gives me hives. Someday we'll have a room solely dedicated to books with wall-to-wall ORGANIZED shelves.  Until then, I buy more and sometimes have to kick them into place.

A room without books is like a body without a soul.
G.K. Chesterton

Flu. The doctor thinks that Rees caught the flu, which stirred up the pseudomonas colonized in his lungs. In these past ten days hospitalized, his pulmonary function and oxygen saturation dove down, while his blood sugar flew sky-high. So now he's home with a PICC, nighttime oxygen, and insulin; and I assume amateur nurse status once again. After sleeping for nine uninterrupted hours last night, he was almost back to his normal personality, making the burden of home healthcare completely worth it.

The response of his college professors has been first-rate: waiving penalties for his class cuts, and even rescheduling research papers and final examinations. Rees told me that he assumed (Yes, I did tell him about that word.) their apathy toward a bunch of freshman taking their classes to fulfil general ed requirements, but is pleasantly surprised and grateful for the willing care extended to one eighteen year old student.

The serious consequence of this exacerbation is the emergence of diabetes. Many adults with CF develop a form of diabetes, making weight gain even more difficult. I guess there's no time for me to get soft in the kitchen; I've been studying and experimenting with nutrition for eighteen years and it's time to get back to work to find a new groove.

Rees has already been walking in our woods and plans a short jog tomorrow. Good old-fashioned exercise is one of the best ways to keep lungs and spirits clear and winter is breaking up in Alaska (I think I only yelled about the Mud twice.). He's hoping to get signed up for this drug study before his pulmonary function gets too high (weird problem).

A shout-out here for the nurses and RTs that take care of CFers. Quite a few have known Rees and all of us his whole life, helping me through those terrible beginning months and playing with my constant stream of new babies that weren't even patients. They've decorated his room for high school graduation, pointed local newsmen to his room for TV sketches, given us bags of second-hand clothing, and saved the best toys from the playroom for Howell kids.  I wonder if our bear-hug greetings break a non-fraternization rule? Ah well.


And our doctor? Whatever he makes, he's worth twice that. He comes every single day and answers every single question ~ no sighing or annoyed body language or haughty looks. If his day is full and we need him, he tells us to come after hours; when Rees wanted to get home with meds, Dr. R. showed up in his room and completed the discharge paperwork at 7pm; when Rees kept removing his oxygen cannula, he got a little snippy with him, rightfully so. Priceless.


P.S.~ Sometimes during goings-on like this, I don't want to be around normal people with normal kids. Nothing personal; it's me. Just so you know!