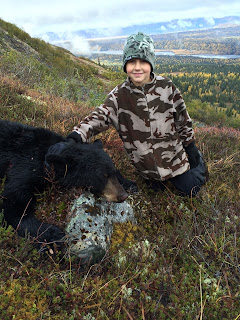 Yesterday Ken shot a bear alongside our 8 year old son. Luke helped to field dress the thing; without, he reported gravely, throwing up or even feeling weird in his stomach. I did not think he was strong enough to partake in this formidable day, climbing up a mountain, trudging through tundra, scrambling over shale fields, and hiding from bears and wolves, only to turn around and return along the same path. But Ken thought he could do it, having just taken the boy on a three-day backcountry hike deep in Denali National Park. He does this every year around Labor Day, taking a different child each year. The kid is usually nine years old, but Luke won't be nine until November. To top off that error in judgment (according to the other children), he is very thin and doesn't like to eat much more than packaged breakfast food like pop tarts or frozen waffles. Almost every night, he opts to make his own PB&J rather than eat the real meal. But off they went. And home they came. With a butchered bear in the trunk. Ken was right.

Comfortably cuddled on the couch with me in the late afternoon, mug of hot chocolate in hand, he relayed all the day's adventures and I realized once again that this boy-child of mine is growing into a man. Aside from the obvious lessons on survival hiking, reading nature, animal tracking, bear behavior, and field dressing that Alaska is so generous to share, he learned deep in his knower that although it was very hard, he lived. He will stand a little taller, just like his brothers before him and within him is forged a stronger hinge between body and mind, welded by arduous, thrilling experiences and a strong, loving father who both prods and walks with his children. Luke will be fine.


The following pictures are from the Denali trip 2 weeks ago: