Our Alaskan sun begins shining through the windows again in February and stirs desires for planting and prettiness that the horrors of breakup ice and mud thwart. Because I get a little burned out (actually, probably just lazy with lessons) from February to April 'ish, I purchase Shiny Things for the children to plug into the boob tube, then send them off on inspired, educational rabbit trails. This is not because I want to lock them in the den and do my own thing; quite the contrary, as I watch with them. They love that part. It is because I'm tired of last August's perfect plans. After math (I never renege on math), here is what I've bought the past three years, and some of the activities that sprang from them:

Reading Rainbow DVD on music got the kids creating their own version of Stomp. Loud but lovely. Also, the conductor from the orchestra segment said something profound about each musician holding back a bit of breakout talent for the ordered beauty of the orchestra. Made me think about reigning in a bit for the good of the family. 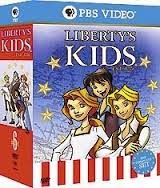 Liberty's Kids spawned writing assignments. Whom did you like the best ~ John Paul Jones? Van Steuben? Dr. Warren? Why? What was he like? Plus so much role-playing.

Schoolhouse Rock. They sing all the songs. That's enough and that's awesome.

Beatrix Potter short films bring to life her little books. They are sweet, proper, a bit naughty, and never crass. I had the children do some nature journaling every day for a week in the same spot, hoping to foster some observation. Some drew bugs, some drew our farm animals, some made up stuff, and one cried that he didn't see anything.

National Geographic VHS tapes (What? You don't have a 23 year old TV bomb with a VHS player? I guess you'll have to stream or something!) from a nice lady at church has been wonderful. Find the place on maps and globes, draw the outline of the land and animal, and write three facts you learned. 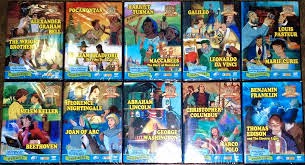 (Since we homeschool under the state's umbrella, all of these are reimbursable educational expenses.)


So yes, the boob tube helps me homeschool through May, when things turn green up here and I let the earth do its teaching throughout the summer.


A week after Addie turned three, we received the dreaded pseudomonas call. Her throat, and probably lungs as well, was growing a bacteria described as a "free ranging, oportunistic human pathogen." It is strong, adaptable, and everywhere. It particularly likes CF lungs with all the extra mucus and inflammation and weakened system. When it's been there a while --scientists think over six months-- it forms a biofilm around its community (I hate that they use such a human word for this nasty creature) that is impenetrable. If it gets stirred up at this point, all antibiotics can do is to knock it down; so far, no one has figured out a way to dissolve the biofilm and kill the bug. This is, of course, my layperson's understanding from a doctor that has drawn diagrams on paper towels for me for years.

But since this is her very first positive culture for pseudomonas, she is eligible for a new drug study that tests whether or not hitting her body with two different antibiotics, one inhaled directly into the lungs and one swallowed, will eradicate it, at least for a little while. Dr. Bonnie Ramsey runs the OPTIMIZE study, funded by the NIH (yes, the feds). So now we've added another nebulized medication twice daily and another liquid medication to be given three times a week (Oh Brain, please remember). We're now in the market for a car- battery-electricity-adapter-thingy so that we can hook up the compresser and administer the meds while out and about.


And you are three!

You wanted lemon cupcakes and lemon ice cream. You got a bright doll, a tea set, and another paint book. One brother crocheted you a scarf and others made you paper puppets. Everyone was thrilled to make colored
hearts and decorate spaces with them. You slept in your purple jammies from your grandparents in your pretty tent from your godparents. You bestowed favor upon your adoring subjects by choosing who was allowed to join you in the tent. I had to make a chart, friends, to make sure no brother was left out and no brother got extra time (Clare's too big to sleep in it.). Goodness.

You are our sparkling jewel and our softest sweetie. Your laughter brightens everyone's day, your smile is contagious, and your kisses are from heaven. We are so proud and grateful to be your parents. Happy birthday, Adah Marie.