Our homeschool charter school had a student expo last week. Students could display any project they wanted.

Six year old Joseph collected some of his favorite artwork, named them all, and glued them to a board ~ 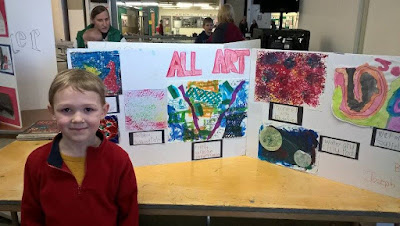 Nine year old Luke is obsessed with the Titanic, so he gathered up pictures he'd drawn, put together a few paragraphs, made a small diorama, and built the famous ship out of old-fashioned legos (no kit) ~ 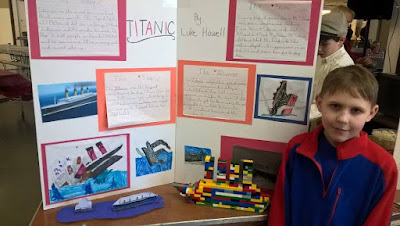 Eleven year old Ian is currently into the Civil War (or the War for Southern Independence, as he informs me is more accurate). He wrote biographies, made a diorama of Little Round Top and baked real hard-tack~ 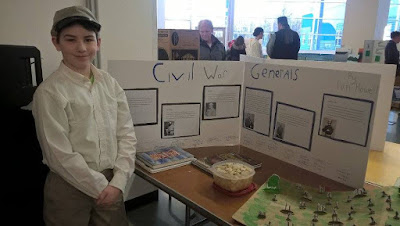 Fourteen year old Clare is a bona fide Potter-head and has drawn some fan-art. I insisted on an essay and she popped one out in half an hour ~ 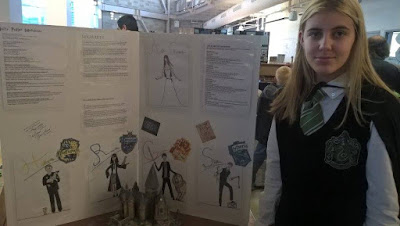 Here's her essay, as a clue to how our homeschooling looks in the dreary grayness here. Just add their mathematics, and they're good.

Lately I have invented a fun game for my younger siblings. I teach them and then test their knowledge on five different subjects. It's called Hogwarts. Yup, I set up our living room to look like the legendary school and I teach Addie, Joseph, Luke, and Ian what the kids in the books learn. I am the teacher: Professor Lyra Burke, pureblood head of Slytherin house.

The five subjects are all from the Harry Potter books and I teach them all. There's Defence [She has adopted British spelling.] Against the Dark Arts, where I teach the kids all about the evil Wizarding things and how to defeat them. Herbology is the study of magical plants such as Mimbulus Mimbletonia, Bubotubers, and Mandrakes. Almost everyone likes Care of Magical Creatures, and I'm sure you can guess what I teach in this class! Potions, however, is hard of most of the students because they have to memorize the ingredients, the way to make it, and how to use it. For the fifth class I choose either Quidditch or Astronomy, as an extra.

I have sorted each of my siblings into separate houses. Eleven year old Ian is a proud Gryffindor who is very good at taking notes during class. Nine year old Luke and four year Addie are studious Ravenclaws who often achieve high marks during exams. Last but not least, six year old Joseph is a happy-go-lucky Hufflepuff who goofs around a lot but like Herbology. They're all good students for the most part.

But they are naughty sometimes. I have a notebook where I keep records of the classes, and also a tally of points. The students' achievements will earn their house points. Any rule-breaking or not listening to the teacher and their house will lose points. When exams (which are going on now) are over, I will figure out which house has the most points and I will give its members a prize. The looming threat of defeat helps the students work harder to gain points and sit still in my classes.

Right now we are in the middle of exams, and Gryffindor is in the lead with 80 points. However, it is closely followed by Ravenclaw, which is boasting an impressive 72 points. Poor Hufflepuff, however, is still trailing a the bottom with 25 points. Still, it's a fun game and everybody involved loves it.