I picked up a few items for Addie this afternoon and asked Clare to unpack, which she did with her usual artistic flair, then snapped this photo: 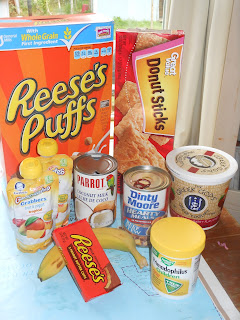 Did you know that Reese's Puffs, along with Cinnamon Toast Crunch, has 3 grams of fat per serving? Highest I've found, excepting granola, which she can't eat yet without any masticating molars! And that the "grabber" pouches with yogurt have fat (only 1 gram, but we'll take it to get enzymes swallowed)?

If you have kids without CF, they will be mad at you for not buying donut sticks and peanut butter cups for all of them and they will orbit the highchair like sharks, waiting for the baby to offer tidbits.

She also really likes the boxed "very high calorie" drinks from Boost that our CF clinic gives away. I, however, don't like her diapers when she drinks them, so they shall remain on the shelf for a month or so before we try again. 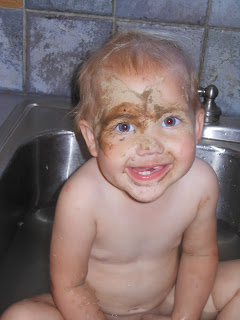 She's doing fine, though, at just about 18 months. She's needed antibiotics three times and steroids once, and weighs in at 19lbs, 3oz. Small but thriving, especially in the dirt.

(Rees is OK, too, gaining strength after a crummy few months and raising his lung function, even though the doctor said he wouldn't.).