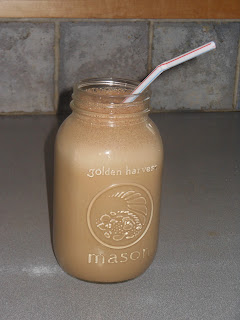 See that shake?  It is no ordinary shake, thanks to this article.  While it looks like a classic chocolate libation and it does indeed contain that crushed, esteemed bean, there are some secret ingredients : spoonfuls of ground flaxseed, coconut oil, and organic butter.  Oh, and a handful of spinach, too.  Although the article also mentions meat fat and cod liver oil, I couldn't manage to disguise those flavors, along with blueberries  (The boy doesn't mind all those extras, but can spot blueberries and turns up his nose at the whole thing.  Weird.)

Eating is practically a full-time job for CFers, who must constantly pay attention to the food in front of them, as well as plan the snacks and meals to follow.  For Rees, a treat is a low-fat popsicle or soda, not ice cream or milk shakes, which are his boring normal.  It is tiring and annoying for him, but he will drink it if I make it.  So I do.  I imagine that once he's on his own  (Hail Mary, full of grace . . .), he'll quickly learn that making his own shakes isn't such a bad idea, as Ensure Plus is over a dollar a can.

*A tip o' the hat here to Dennis Prager, who reminds Americans that growing up occurs when one has the responsibilities of employment and bills, not when one is a college student.  Which means I can make his shakes for a while yet without feeling like I'm one of those helicopter parents.   Which I'm not.  Really I'm not.

And I'm adding those fats to the daily diet for all of us because I like the idea of cell walls and brains having the right stuff.