My internet friends Kelle and Emily  (Welll, they don't exactly know we're friends!)  have recently written about delayed development here and here in their daughters with Down Syndrome, who are so darling, my daughter asks for a sister who looks like Nella and Mirabel!

The reason many CFers deal with delayed development is different than the reason of Down Syndrome, of course, but feels much the same for us parents.

Rees was "late"  (I hate those charts!)  in all skills because he was busy breathing.  Or not.  CF was not diagnosed until he was 9 months old, so for 9 months, we figured that he was just sickly, slow, and miserable.  My chest tightens a bit even now to think of those months when the little guy struggled so.  After The Diagnosis and a week hospitalized with the big gun antibiotics doing their jobs, Rees was bright and merry.  The doctor remarked one morning, "Well, you've got your baby back."  And we, wide-eyed with wonder, answered, "We don't know this child!"

Numerous hospitalizations throughout the years do stymie some developments that "experts" like to point out with their charts, but boast some developments, too ~ the ones that are more complex to quantify but are the stuff of a real, good life.

And, he did figure out how to walk!  Who cares when he had the strength to do it?  He fought on and was strong.  I must admit that those of us with chronically ill children possess a certain arrogance at their accomplishments.  They're sweeter.  More meaningful.  More costly.  More valuable.

So when Rees achieved a black belt in Shoshindo last weekend, when kids he'd begun with made it over a year ago, I swirled with the seemingly contradictory sentiments of haughtiness and humility.  Afterwards, when people dutifully applauded and good-naturedly slapped shoulders, I wanted to shout,  Do you know about CF?  Do you know about the hospital?  Do you know about pseudomonas and aspergillis?  But I didn't.  This victory was his own, without his Mommy  (How did that happen?).  It took him longer than the others, but he prevailed.  He played well the cards dealt him, as we all must.

Accomplishments, I think, should be measured by depth, not height. 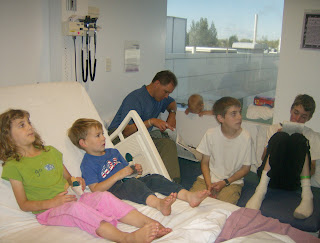 Family, hanging out at the hospital, a second home sometimes. 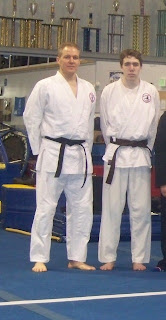 Last Saturday evening, when it was all over.  R is drained.  But triumphant.

Warmly,
Allison
Posted by Allison at 12:21 AM